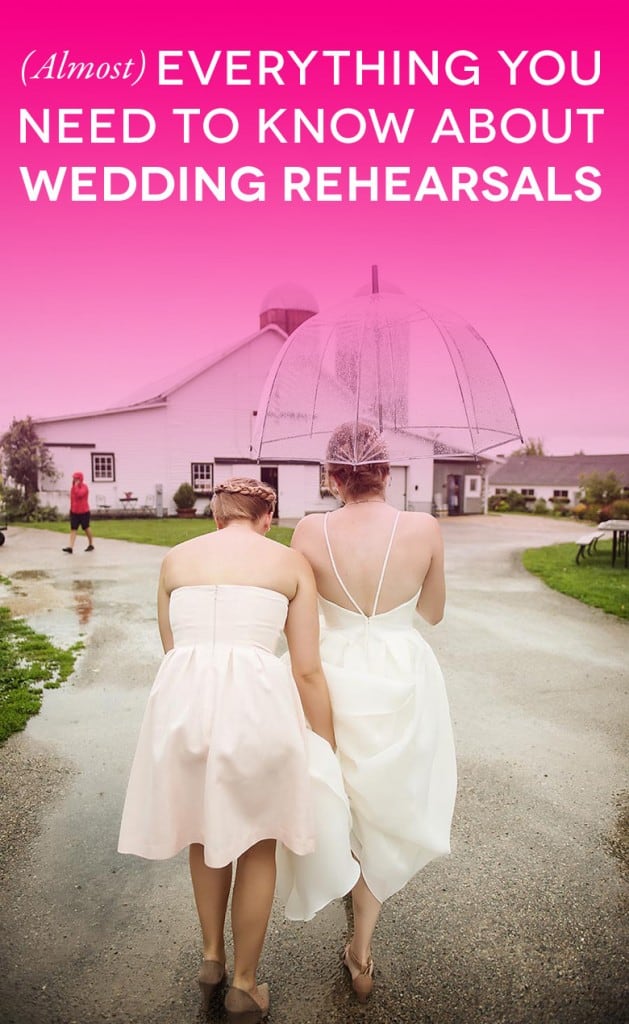 WHAT YOU NEED TO KNOW ABOUT WEDDING REHEARSALS

WHAT YOU NEED TO KNOW ABOUT WEDDING REHEARSALS

While it gets lost easily in the noise of the industry, the truth is that the wedding is the ceremony, and the reception is the party that happens after the wedding. In a similar way, the rehearsal dinner has become a big deal in the wedding machine, and the rehearsal itself is often an afterthought. But I have witnessed time and time again how much smoother ceremonies run when they’ve been rehearsed.

Now, there are obviously going to be times when you may not need a rehearsal. If the ceremony involves just you, your partner, and the officiant; you have a straightforward entrance and aisle; and music that doesn’t need super specific cues, you can probably skip it.

However, the typical wedding ceremony is at least slightly more complicated, and this is where the rehearsal comes in. You probably need to rehearse your ceremony if you have people who are:

None of this is necessarily particularly complicated, but doing a run-through of it before it happens in front of a crowd will make it seem natural and help avoid some common pitfalls.

Now, what doesn’t happen at a wedding rehearsal is a full read-through of the entire ceremony. If you want to do this, you certainly should do it with your partner, your officiant, and anyone else who’s speaking (and, regardless, you should all practice your parts out loud individually). But you shouldn’t read through every word of the ceremony at the rehearsal where you have a decent-sized audience of people who are going to hear it all again the next day (efficiency and protecting the emotional impact of actually hearing the ceremony and your vows out loud are the reasons for that). So what exactly are rehearsals for? Choreography and blocking.

When I say choreography, I don’t mean dance. What I mean is “a bunch of people have to move from one place to another smoothly,” which mainly comes into play doing the processional (entrance) and recessional (exit), or, as a client of mine called them “the cessionals.” The aisle walk is probably pretty (literally) straightforward for most people, but the things you need to cover when rehearsing it are:

Now, let’s move on to blocking: where people are positioned (and repositioned) during the ceremony itself. Some things to think about:

This all, of course, comes with the caveat that everything should make sense when done at your particular ceremony site! Which brings us to my last important piece—as long as your ceremony site and setup are relatively straightforward, you can definitely rehearse off-site. I’ve done rehearsals in hotel rooms, backyards, hotel conference rooms, and, once, a parking lot. Anywhere you have enough space to create a faux-aisle and line up everyone who’s going to be at the front at the same time, you’re good. If you have a particularly unusual ceremony site, aisle arrangement, or entrance, it may make more sense to make the effort to rehearse at the actual site, but even then don’t panic if your venue isn’t available at a time that works for your wedding party. Most grownups can figure out how to adjust things to another site, especially if it’s only one day later.

And, a final note: I generally schedule an hour for rehearsals. Fifteen minutes to gather and explain things to people, thirty minutes for the first run through, and about ten minutes for the second run through, because at that point everyone gets it and you’re just proving it to them by having them practice.