Wedding planning tends to bring up things you never thought you’d have to have an opinion about—things like table settings. Because, people? There are options. Lots of them. If you really don’t care, most caterers have a preferred setup, and you are perfectly welcome to just tell them to do whatever they think is best. However, if you (or your family/friends team) are in charge of setting the tables, well… you have to make a decision about both what goes on the table and how it’s being arranged on there.

The good news is that there’s a lot you can do with basic rental ware and linens—yes, if you want to pay to upgrade there are about ten thousand pretty (and often expensive) options out there, but you can absolutely to stick with basics and still be in great shape. The vast, vast majority of rental companies charge the same for any color of linen and, most rental companies charge the same price (or very close) for either poly or cotton. Choose cotton. They’re heavier, lie better, and more absorbent than poly (important when it comes to napkins.) That said, if you’re getting your linens from the venue, it’s likely they only own one color, so anything else will be an up-charge because they’ll be renting themselves.

To illustrate just how many options you have with rentals, APW sponsor and Advertising Manager Emily and I went to the Hartmann Studios rental warehouse a few weeks ago (rental warehouses: unexpectedly magical places) and put some sample tables together to show you how small changes like linen color and style of napkin fold and placement can totally change the look of your tables for absolutely no extra money. Let’s get started. 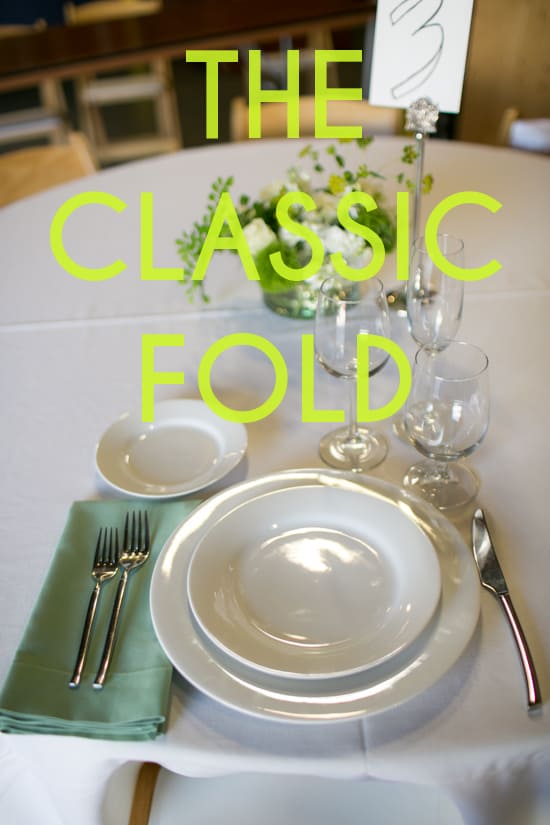 This is the most classic, basic table setting out there. It works well if you’re doing a pre-plated salad for guests when they sit, and if you want multiple glasses (shown: water, wine, champagne.) The napkin fold is the easiest out there, but when you’re setting over a hundred places, it’s good to have a standard system. Step by step: 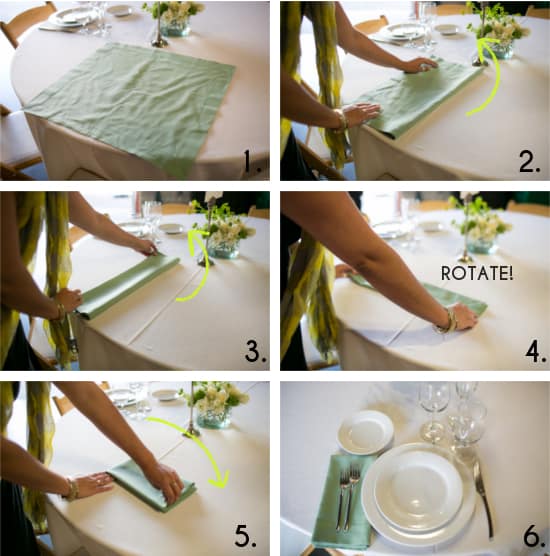 Start with the napkin flat, seam side up. Fold in half, fold in half again. Rotate, fold in half the opposite direction. Place next to plate, forks on top.

Now, same napkin fold, with a less formal placement, which also will make the color of your napkin more front and center on your tables: 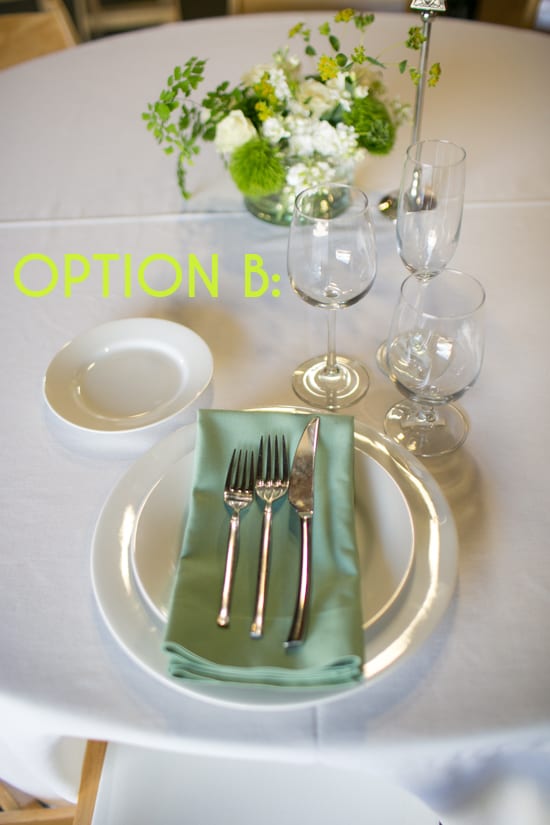 Simple variation: don’t need multiple plates, forks, or glasses? This looks great with just a place card on top. Note that we’re using the same white and green centerpiece, but have switched up the tablecloth and napkin color. 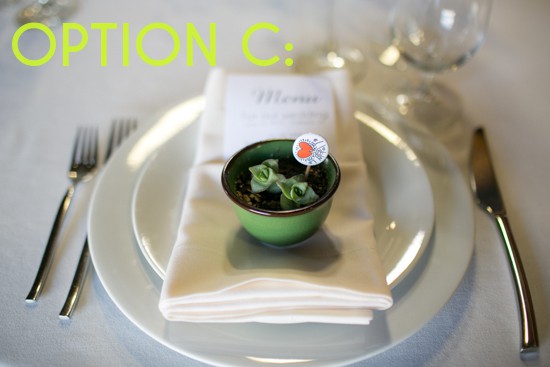 You can also (oh hey!) have more than one color of napkin: 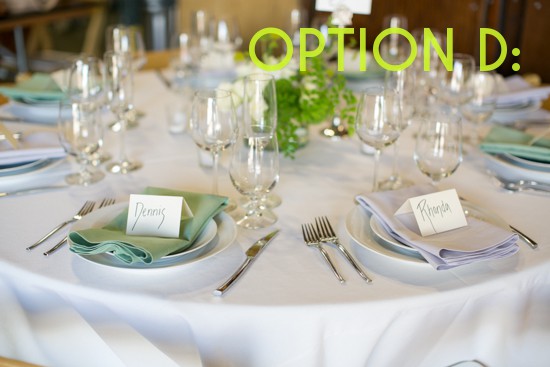 And, my personal favorite, an option with one less step that’s a little more unusual: the long napkin fold. Exactly the same as above, just don’t make the final fold, and then hang the edge over the end of the table. Bam—color! 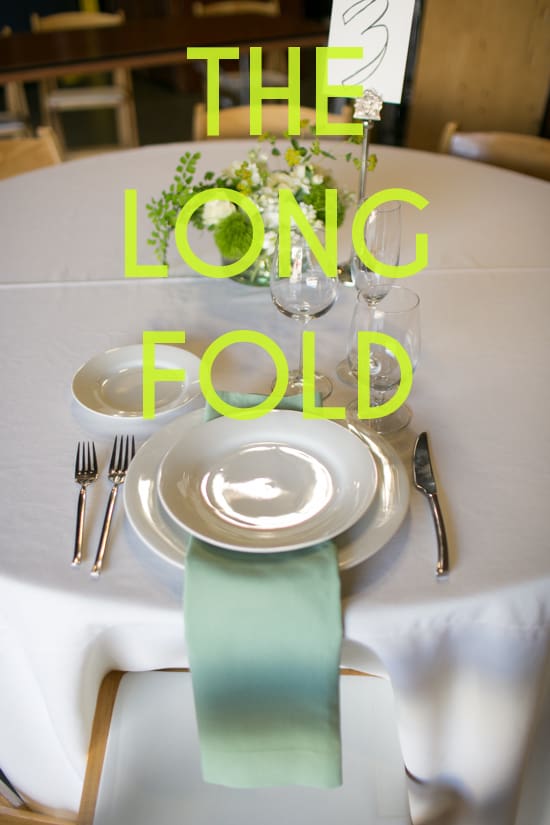 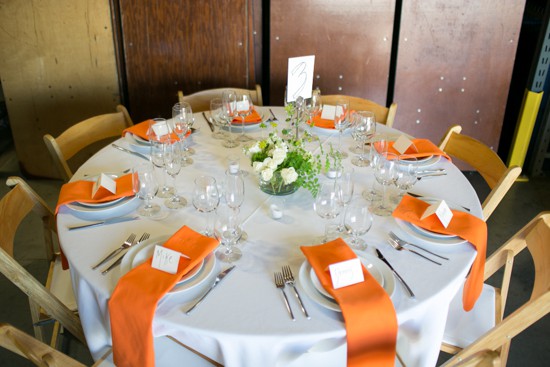 Now, maybe you want menus, because they’re cute, you like paper things, and hey—you spent a long time developing your menu with your caterer. You could use the menu fold, which is called such for a reason. It’s the most complicated of the napkin folds (and has many, many variations of its own), but we have a lazy trick for you! 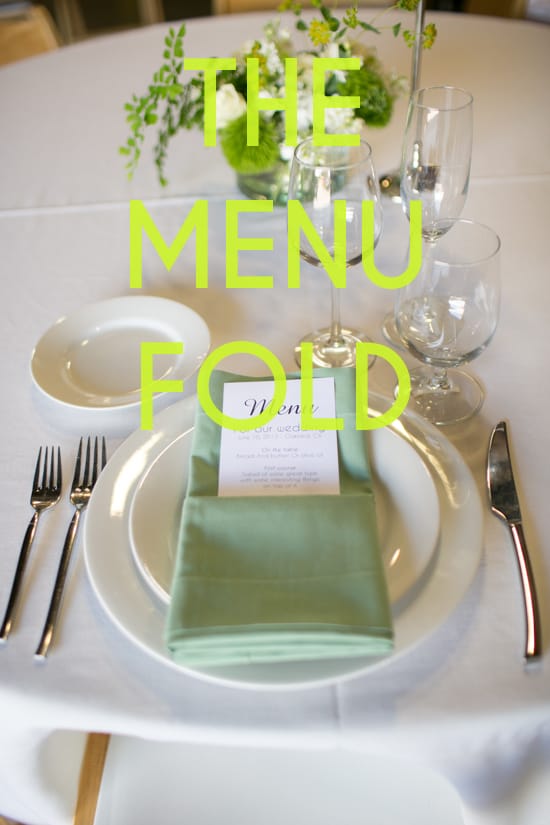 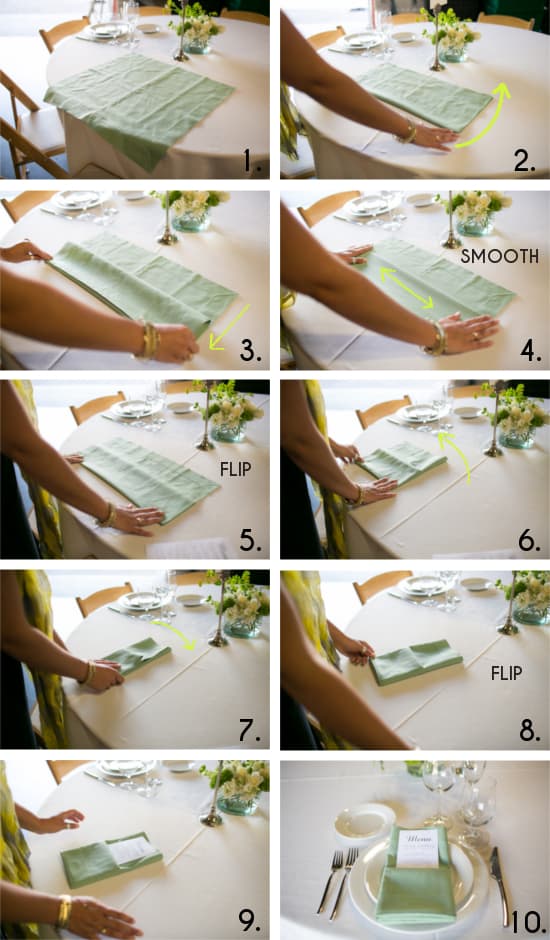 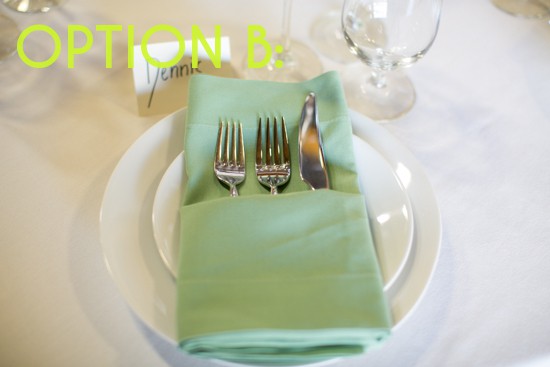 If you’re doing favors (which you totally do not have to do!), I’m a fan of putting them on the plate and making them part of the table decor. Double duty is always a good thing.