If you’re like most people, you’ve probably attended weddings in the past, picked up your escort card, and found your table without ever really thinking about the work that has to go into making a seating chart. For many of my clients, the seating chart is one of the most stressful parts of wedding planning—I’ve seen clients both cry and fight with each other (and their families) over them. Just recently a client of mine posted something on Facebook about their seating chart, and one of the responses summed it up perfectly as being, “Like Tetris, but with emotions.”

By nature, seating charts have to be made at the very end of the wedding planning process (after your RSVPs are in) when you have a ton of other stuff on your plate. Plus, they’re not something you can delegate to someone else. (As I tell my clients—I could do your seating chart for you, but since I don’t know your friends and family, it’s entirely possible I’d end up putting your conservative great-aunt next to your anarchist college roommate.) It’s important to note here that you certainly don’t have to have a seating chart, and the logistics of a seating chartless wedding are something I’ll go into in a future post (because, hey, you don’t even have to have tables at your wedding!) but for those of you who are in the midst of staring at your guest list trying to figure out how exactly this is going to work? While I can’t promise to make the creation of your seating chart painless, here are some tips I’ve learned over the years that might just make it manageable.

At most weddings, your guests are sitting at their tables for at max ninety minutes of what is a pretty long event. So, while ideally everyone has someone at their table who they like, and no one is at a table with someone they can’t stand, don’t stress too much about breaking all of your guests into the most-perfect-groups-of-eight ever—they’ll have hours to hang out with whoever they want. Now, if your wedding consists of a six-course plated meal that’s going to take three hours, you may want to work a little harder on creating great groups, but this is also where I encourage people to let the guests who won’t know anyone else at your wedding (see: that one former co-worker you’ve stayed close to, or childhood friend who lives out of state and doesn’t know any of your current friends) to bring a plus one, even if you’re not allowing them across the board.

For the majority of weddings, assigning your guests to tables, but not to specific seats at those tables is going to be fine—with the exception of a multi-course, plated meal with multiple selections for each course. If you do assign seats, you’re going to need both escort cards (which get picked up at the entry and tell you your table number) and place cards, which are on the table and tell you which seat is yours. With assigned tables you only need escort cards, or you can make things even easier, and scrap the escort cards for a seating chart (which is really just a big poster with a list of people’s names and table numbers on it. A chart also has the bonus benefit of not being able to get lost, which somehow always happens with escort cards even when no one is leaving the room).

WHERE DO WE SIT?

I’m semi-convinced that the sweetheart table (a raised and/or “head” table at the front of the room where you and your partner sit) was originally invented for couples with acrimoniously divorced parents, since one way to avoid having to pick who to sit with is to sit with no one. But a sweetheart table is not your only option. If your families all get along well (or, well-enough) a table made up of you and your partner and both sets of parents can be great, or a table with your wedding party and their dates works just as well. Regardless, I often encourage couples to put their table in the middle of the floor plan, instead of on one edge so that you can put the maximum number of other tables close by and avoid anyone feeling like they’re in the “cheap seats” on the opposite side of the room.

DO TOASTS DURING DINNER

If you’re doing a sit down meal, I always encourage toasts either a) after the last table has gone through the buffet, or b) after entrees have arrived (either family style or plated). Your guests are a captive audience at this point, people can totally eat and listen at the same time, you don’t have to carve a thirty-minute time chunk out of somewhere else in your schedule, and, if people don’t like who they’re sitting with they don’t have to try to make awkward chit chat with them (key point: the first person to give a toast should tell everyone to please keep eating while people are talking).How many people can fit at one table? The short answer is that you can fit six to ten at a 60″ round table (the most common table size). But what does that mean? 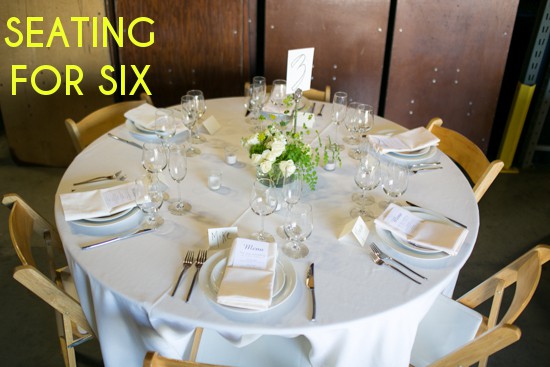 1) ROUND TABLES: The fewest people you want per 60″ round is six—less than this and the table will feel oddly big and empty. You can see that people are pretty spread out here, but are just above feeling too spread out. 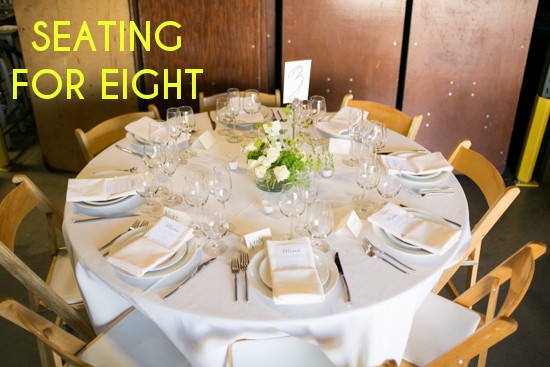 Eight is the ideal number—it feels full, but not crowded, everyone is going to be able to pull their chairs in all the way, and still have some elbow room. Rad. 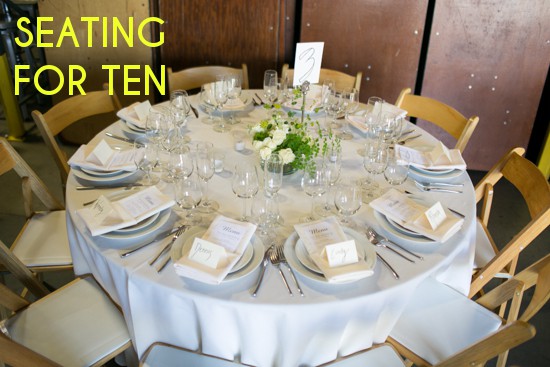 Note how close the place settings and the chairs are to each other. Yes, ten people is really the maximum you can put at a 60″ round—there’s simply not space to squeeze an eleventh in there and still have enough space to pull chairs close enough to actually sit (or, more importantly, eat) at the table.

2) RECTANGLES: The most common size of rectangle table is 6′ by 30″. They seat either six or eight people, depending on if you use the endcaps (short side of the table.) As pictured: 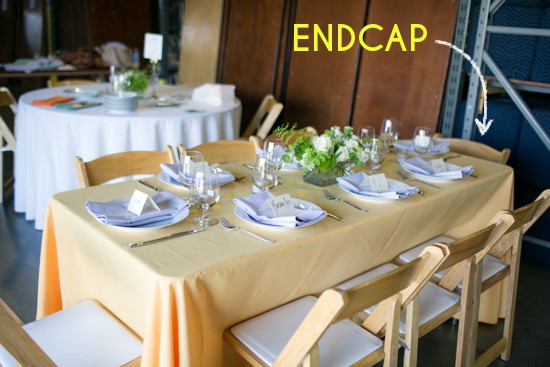 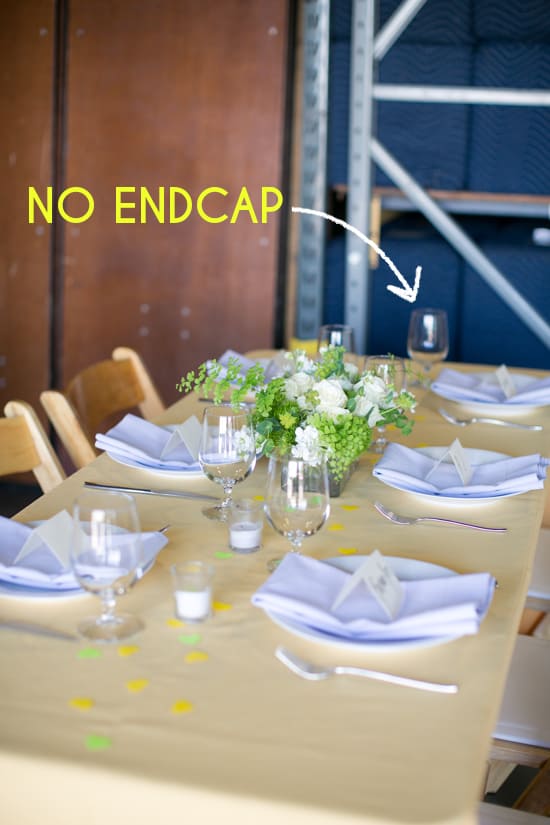 3) LAYOUT: But how many tables can you fit into your room? This is a big one people—do not forget to leave room for people to walk between tables and to actually get in and out of their seats. The standard is a minimum of 60″ between tables, and… it’s correct. Pictured below—about 48″ between tables: 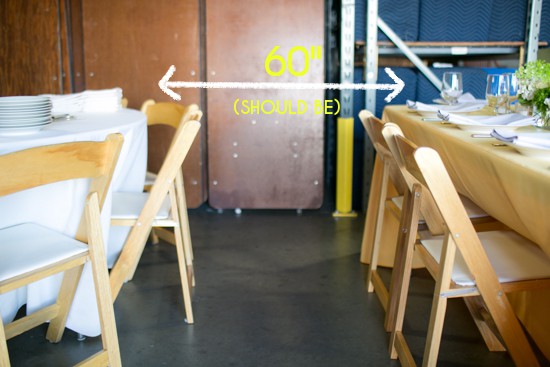 That seems fine. But then you pull the chairs out (which they are when people are actually sitting in them, unless your guests are somehow… flat?)… 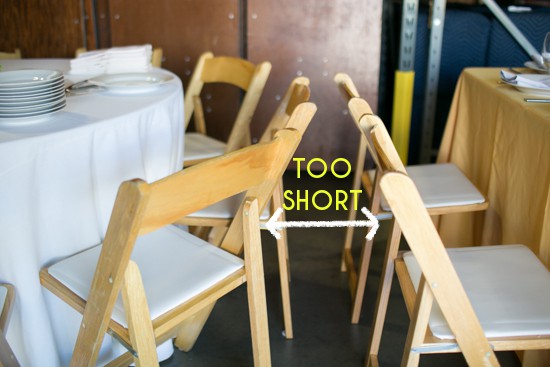 And really, there’s not enough room for anyone (a waiter, or guest trying to get to their seat) to easily get in between those chairs. Do not let this happen to you—keep those tables 60″ away from each other (or, at least 30″ away from a wall).

Okay, so you know how many people are coming, how many tables you have, and how they’re going in the room—how do you arrange all these people without losing your minds? There are a bunch of fancy software programs out there that will help you do this, and I’ve heard good things about the one from Wedding Wire in particular. But, for those of you on the low-tech end of things, I like to suggest a super easy paper alternative that can be done with things you likely have sitting in your house. 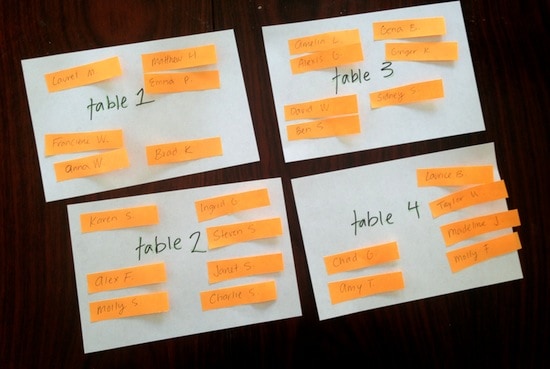 Write each guest’s name on a post-it note, and line up as many half sheets of plain paper as you have tables. Then proceed to stick those suckers down, and move people around until you have the appropriate number of people at each table, and you are satisfied with the arrangement. Take a picture, or, better, transcribe this list into a bullet point list or spreadsheet (if you have a master guest list spreadsheet, just add a column labeled “table number” to it!).

I generally encourage people to ask their closest friends and family members for input on the seating chart—you may be surprised to learn that your parents would really rather be at a table with their college friends instead of their siblings. I also encourage people to think about mixing up groups of friends and family. At a friend’s wedding a few years ago they put a lot of thought into blending groups—everyone had at least one person at their table they already knew, but then other people who the couple thought they might have something in common with. Almost everyone commented on how lovely it was to have the chance to talk with people they might not have otherwise (and really, I love my extended family, but I know them well—I personally think it’s much more interesting to sit at a table with cousins from the other side of the aisle than one made up of just my cousins, who I likely just spent all of cocktail hour chatting with).

And, if you’re currently in the weeds of post-it-note (or software) hell, just remember—your guests are adults (or have an adult with them); they love you and are happy to be there, and will hopefully be gracious about whatever table they end up being placed at. If not—just remember that a well-stocked bar can go a long way towards soothing things.