May 4, 2010
The well attended second annual “Administrative Professional of the Year 2010” Awards ceremony, held on Wednesday, April 21, kept nominees guessing right up to the moment of announcing this year’s winner. The evening’s host, Ms. Joanne Brown, Founder and CEO of Celebrations, the major sponsor and creator of the award, expressed her, “delight that so many took the time to nominate a friend, colleague or employee.  It was truly inspiring to read the fantastic comments & feedback that were submitted.” 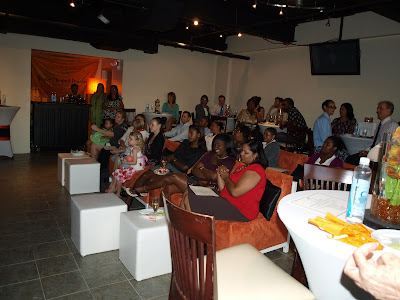 She went on to note that, “In recent years we have seen Administrative Professionals Week grow in significance in Grand Cayman. Employers are aware of the importance of rewarding and encouraging their staff. Last year we decided that we would like to go a step further creating a nomination process and a recognition programme that would ultimately present one deserving individual with the award for “Administrative Professional of The Year”.
All the nominees where recognized and four runner-ups were announced with the 2010 top award ultimately going to Ms Angella Berry, Personal Assistant to the CEO of the Health Services Authority. Angella was nominated by Lizette Yearwood. Ms Berry was awarded a beautiful plaque created by Celebrations along with a Celebrations gift certificate as well as a Blackberry courtesy of Digicel, a spa package courtesy of the Westin Casuarina Hibiscus Spa and the champagne reception was sponsored by Veuve Clicquot courtesy of Blackbeards.
Mr. Phil Jackson, President of the Cayman Island Society of Human Resources Professionals commented that he, “felt the Awards programme was a wonderful initiative created by Celebrations and that as one of this year’s judges he was impressed with the accolades from those nominating the candidates; making the final decision a very difficult choice.”
Ms. Brown also announced plans for making the event “even better and bigger for 2011 with a longer lead time for the nomination process and a more formal event to be held next year along with the generous support of our sponsors.”