May 29, 2009 Our Very Own Ahmed and His Space Shuttle Launch Experience https://www.celebrationsltd.com/our-very-own-ahmed-and-his-space-shuttle-launch-experience/

Our Very Own Ahmed and His Space Shuttle Launch Experience 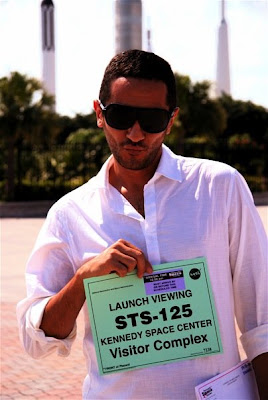 Ahmed Elkaswani, a Celebrations wedding planner, has been featured in the local newspaper, Caymanian Compass, talking about his Space Shuttle Launch experience. Needless to say, we’re happy for Ahmed who up to now is still gushing about this wonderful experience. He’s literally bouncing off our office walls!
Please read the entire article below as written by Camanian Compass’ Cliodhna Doherty:
It’s not everyday that someone gets to witness a space shuttle launch on an important mission to help humans understand more about the universe. 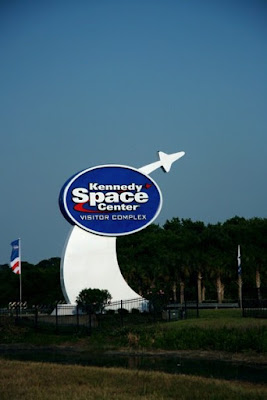 But that’s exactly the situation in which Grand Cayman resident Ahmed Elkaswani found himself in recently after he had planned the wedding of two astronauts here in the Cayman Islands.
The Celebrations employee witnessed the take–off of the Atlantis Space Shuttle on 11 May from the Kennedy Space Centre in Florida on its mission to repair the Hubble Space Telescope. “It was a completely different experience,” Ahmed enthused. “I’ve never experienced anything like this before. You meet doctors and you meet race car drivers but you don’t meet astronauts on a daily basis, which is quite cool,” he told the Caymanian Compass. 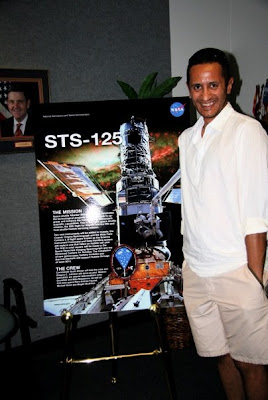 Gregory Johnson, the NASA pilot of the Atlantis Spacecraft and his now wife Nanette Faget, a Ground Engineer at NASA, fell in love with Grand Cayman after they visited in 2007. They married here in January 2008 with Ahmed as their wedding planner for Celebrations. Ahmed showed the couple a lot of interest in their roles as astronauts at NASA. 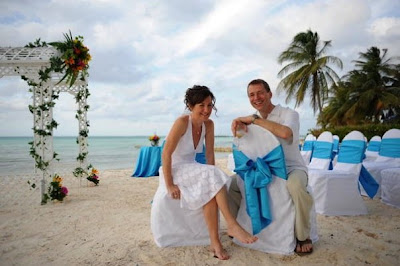 “When they came down here just before their wedding we had a sit down and I started asking them more questions about what they do and about this mission going up to space.

“To me, it’s out of this world, literally. It just doesn’t seem real to a regular person like me in the Caribbean.”
The wedding, which took place at a private villa at Kaibo, was a great success and shortly afterwards Ahmed received an email from Nanette inviting him to join them for the Atlantis launch.
“I said ‘Of course, I would be delighted, it would make my year, it would make my century I think’. So I was very excited,” he said.
But it was to be a long wait. He got the invite in February 2008 and the launch was originally scheduled for August of that year, but then the launch was delayed to October and then postponed to February 2009. Then a date was finally set for 11 May, enabling Ahmed to book his flights and get ready to go.
And so he found himself at the Kennedy Space Centre near Cape Canaveral, on 11 May, on a causeway about four miles from the launch pad with friends and family of the other astronauts and crew. “It was one of the closest areas and we had a clear view of the launch pad and shuttle,” he said.
The causeway was a private secured outdoor area. He explained that immediate family members of the crew could not even be too close to the launch pad because of gas and fumes from the space shuttle. 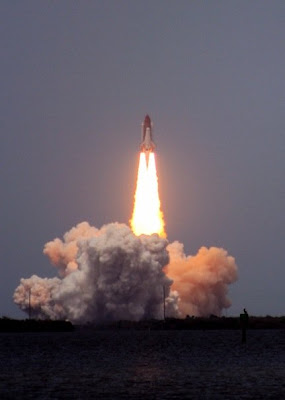 Speaking about the actual launch, he said, “It was amazing – the view – and it was the experience of a lifetime to feel the ground shaking. It was pretty cool.

“The sound itself just makes it surreal – that roar. I was sitting there almost in shock watching this thing thinking that I know the person sitting in there that’s going to fly it up into space. It’s an amazing experience just to sit and watch and know you know the person in there.”
Coupled with the excitement, he was nervous for his friend’s safety. 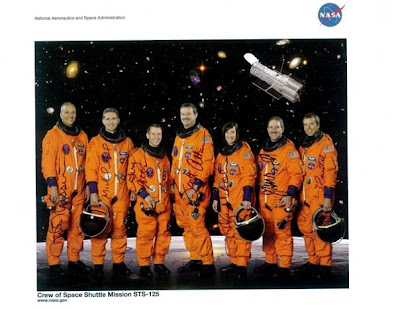 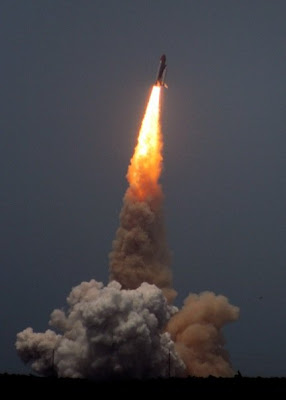 “I was shaking the whole time. The thing is on rocket fuel and the thing could blow up and you’ve got so many people watching it.”
“The Hubble scope is an amazing instrument. It’s amazing to be part of the whole scenario – to know that someone is up there working on something that can help everyone on this earth with knowing what dark matter is and what the Big Bang Theory means, all of that. This is what the telescope is trying to solve, so it’s a pretty cool machine.”
Many Hubble observations have led to breakthroughs in astrophysics such as accurately determining the rate of expansion of the universe.
And following the mission they have revived the Hubble scope to last another five to 10 years with a new battery and sensors to reach above and beyond what it did before.
There was live video feed between the crew and ground control centres and interviews with the astronauts from space.
One of the highlights of Ahmed’s experience was getting an email from Gregory from outer space while on his 11 day mission, which included five space walks, two of which were rated one of the top 10 longest space walks in history, said Ahmed.
The spacecraft was supposed to land on Friday, 22 May in Florida but because of bad weather it landed instead in California on Sunday, 24 May.
Ahmed also believes the Cayman Islands flag went to space and it is hoped there will a presentation of this at some stage to the Cayman Islands’ Government.
The night before the launch there was a cocktail reception for the friends and families of the astronauts, to which Ahmed was also invited.
“It was amazing. It was at the Apollo–Saturn V Museum at the Kennedy Space Centre. It was a private function and we got to mingle with all the other crew members that were there in support of the mission.”
The morning of the launch they got to walk around the Kennedy Space Centre and view the attractions. “It was only open to the visitors that were going to witness the launch,” he said. All in all, Ahmed says it is an experience he will always cherish. “I was not only there for myself but for Celebrations and the Cayman Islands,” he said.
“It was a once in a lifetime experience and history in the making. It’s the last shuttle to repair the telescope.”
“And for the country [Cayman] to be part of that too and to have Greg liking the country so much to hopefully have taken a flag up there, that’s pretty cool,” he said.