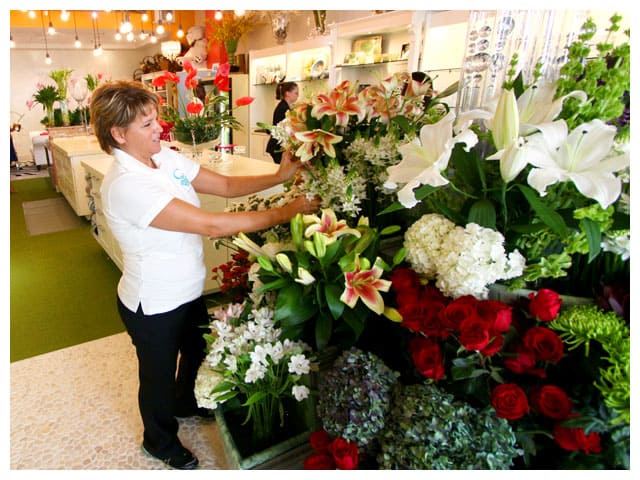 Martine was born in the province of Quebec, a French speaking province in Canada.  She  learned to speak English  later on when she and her family moved to Saskatoon, Saskatchewan for work.  After a few years, her Dutch Father was approached to start a floral whole sale business back in Montreal, where their family opened a warehouse.

It was at the age of  13 years old when her father introduced her to the floral world. Her first  job consisted of helping her  father around the warehouse on weekends, where she quickly became fed up seeing gorgeous flowers just lying in boxes. She wanted to create something, and she did.  With her creativity, she quickly became skilled at turning wholesale flowers into arrangements.

Martine started her  own flower shop in Montreal in 2002, focusing  on providing flowers for weddings in the area.

In 2010, Martine sold her boutique in Montreal, and began to focus on finding a new adventure. She discovered the Cayman Islands, and with the support of  her husband, they began a new chapter in their lives.

Soon after Martine found herself  at Celebrations.  With the same style and views and  the opportunity to run the newly opened Celebrations Camana Bay, Martine not only found her new adventure but she has also found a new home.

Welcome to the Celebrations Team Martine! Watch her weave her floral artistry in person, come and visit her
at Camana Bay!