In February 2019, His Excellency The Governor, Martyn Roper and The Honourable Premier, Alden McLaughlin announced that Their Royal Highnesses – Charles, The Prince of Wales and Camilla, The Duchess of Cornwall would officiate the grand opening of the new terminal at Owen Roberts International Airport(ORIA) on March 27. What had started out as a standard grand opening event soon became a whirlwind of planning, protocol and precedence.

Celebrations Ltd. previously tapped to provide event services for the grand opening, were honored to now be tasked with taking over the coordination of the event; ensuring that all the engagements throughout the official opening run smoothly, on time, safely and of course, successfully.

What does it take to coordinate the grand opening of an airport with members of the Royal family?

A lot of meetings, precise timelines and LOADS of security.  Not unlike other events Celebrations coordinates the typical processes still apply, however, on a slightly larger scale.  As event planners the goal, of course, is to provide the best possible event for the client, bringing their vision to fruition and making it as stress-free and painless as we can.  Our coordination of this event started out the same as any other, with a walkthrough, an assessment of our clients’ needs, wants and goals followed by recommendations and plans on how to accomplish this.  Add in two visiting members of the Royal Family and it all changes, becoming much bigger, GRANDER, and much more involved!

As the official coordinators of the event for the ORIA Grand Opening, our entire special events team found themselves all pulled into the planning, coordination and execution for the upcoming Royal Visit and the grand opening. The many moving parts and demands of such a prestigious visit require the utmost attention at every level.   Additional meetings with various government departments, the Protocol office, CIAA and ORIA, and a new dimension was factored in with the addition of all the security requirements. Every vendor required vetting and confirmation, every dignitary and seating arrangement methodically reviewed, and every detail of the entire plan timed and precise to ensure the utmost security and safety for those involved and so as not to interrupt the itinerary of Their Royal Highnesses. Instances such as this are nothing new to our team, well versed in wedding planning and event planning our experienced team of professionals prides themselves on the ability to adapt and adjust easily to the requirements of the job, ensuring a smooth process for the clients involved.

With all the t’s crossed and i’s dotted, meetings held and plans finalized it was time to get to work!

On-site set up preparations commenced on the evening of Monday, March 25th with large screens being set up.

Tuesday evening saw our Celebrations team and additional vendors arriving en-masse to set up the full perimeter, install the stages, place décor, cordon and prepare the airport terminal for the upcoming event.

Wednesday morning, the final touches came together with the addition of bunting, linens and floral accents. All vendors began to take their places, food and beverage stations filled and security began their sweeps and protocol.  The RCIPS team assumed their stations and the final red carpets were rolled out.  Everything was ready for Their Royal Highnesses to arrive! 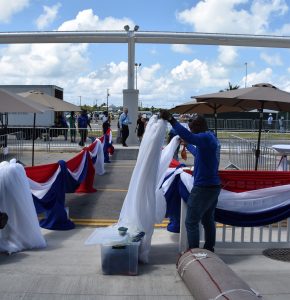 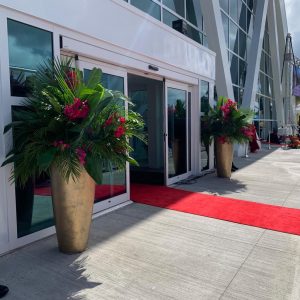 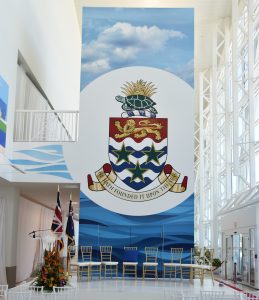 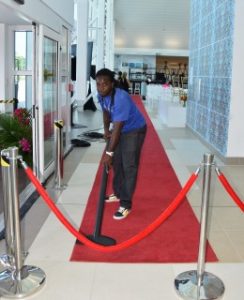 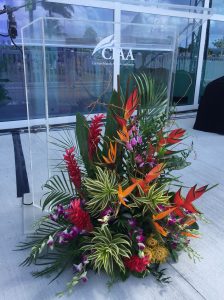 As the hour of arrival approached further public and guests filled the viewing area, our team and the RCIPS maintained a strict cordon on entry and security protocols, and the VIP delegates began to fill the ceremony area inside. 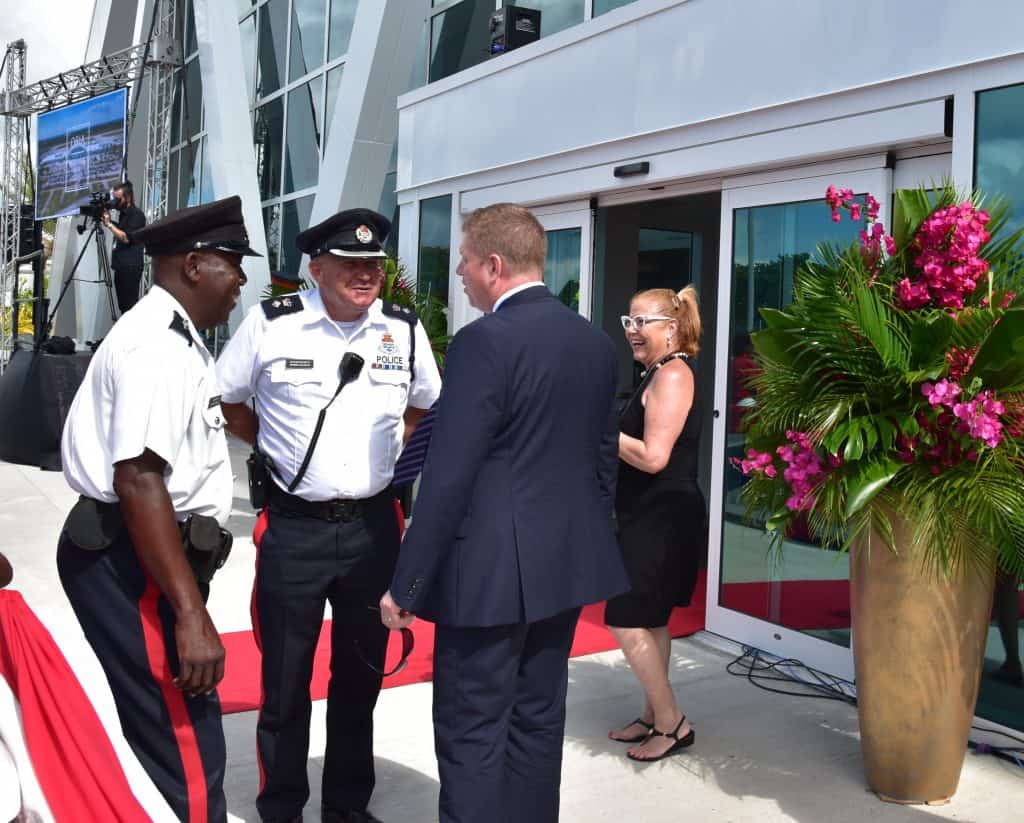 Arriving on site Prince Charles and Duchess Camilla made quick but polite progress up the red carpet to the terminal, taking moments to great the school children and the public in attendance along the way before proceeding inside to continue through a receiving line of government officials and dignitaries. 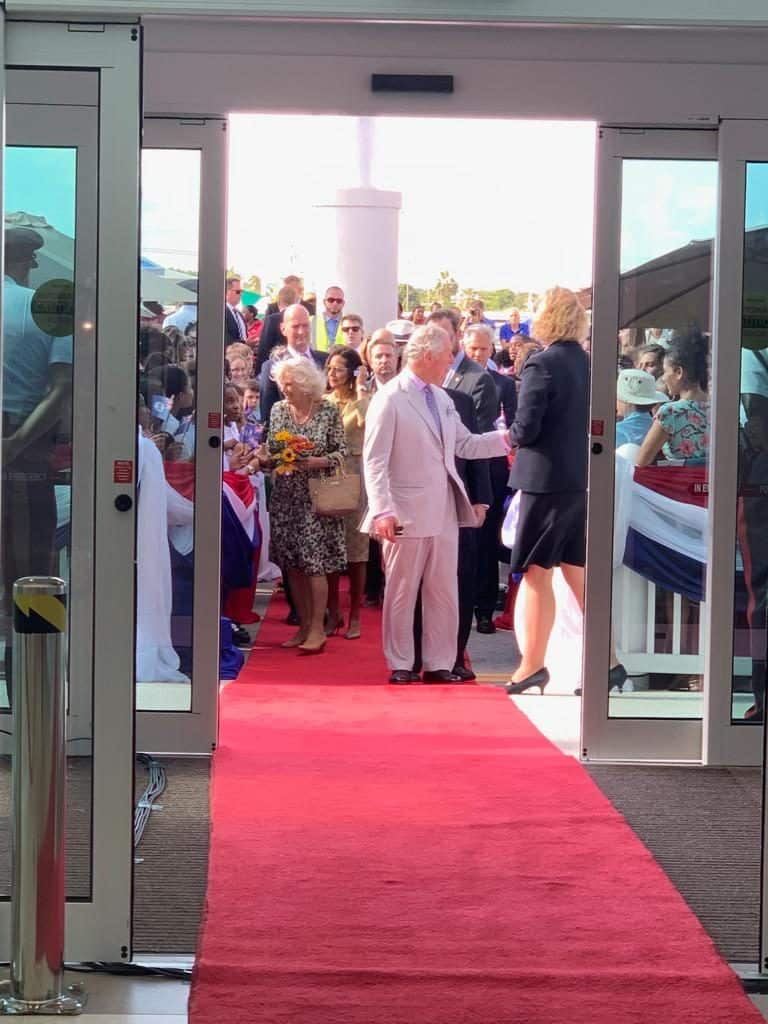 After a brief ceremony inside Their Royal Highnesses continued outside to commence with the unveiling of the official plaque, proclaiming the new terminal at Owen Roberts Airport officially open.  After which they proceeded back down the red carpet and onwards to their next event. 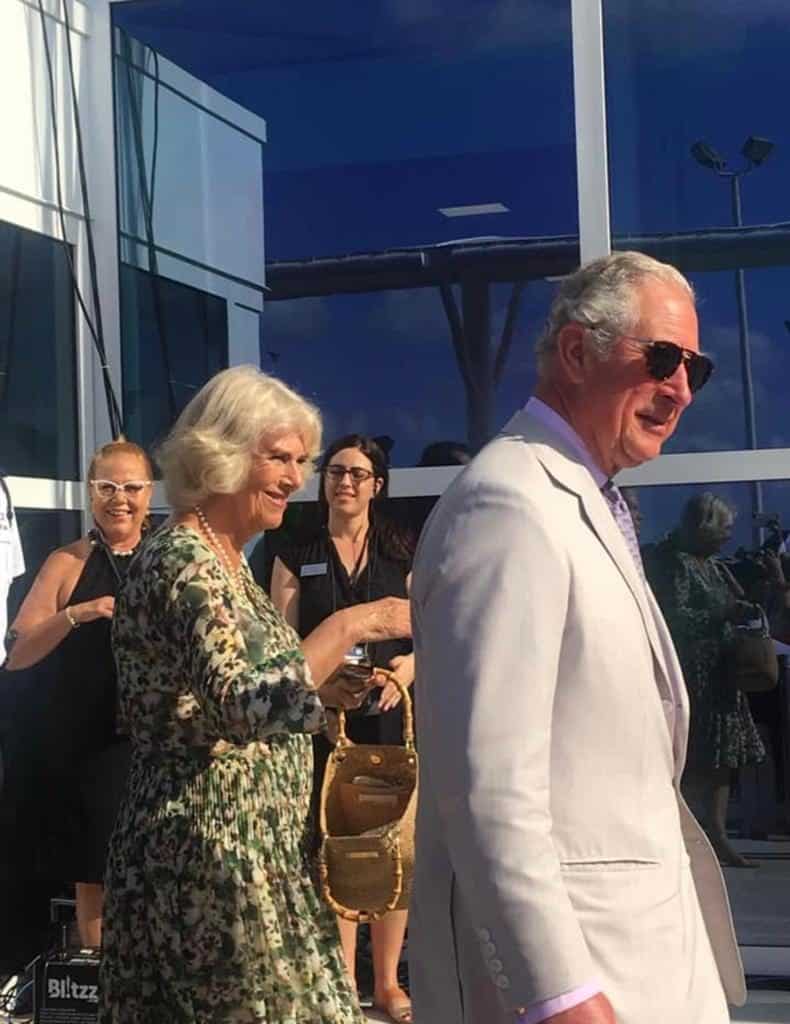 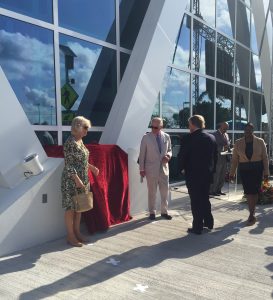 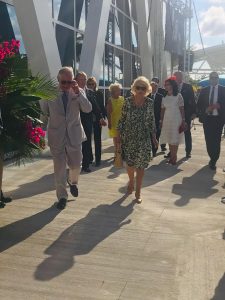 As His Royal Highness Prince Charles was leaving, our Head Planner, Mary Ann Mehigan took the chance to say “Thank you for your visit” and His Royal Highness stopped to shake her hand and told her, “Well-organized event!”, high praise indeed that we are thrilled to receive.

With the dust settled and the final attendees filtering out, our team was back in full force to complete the production of such successful event – the teardown! 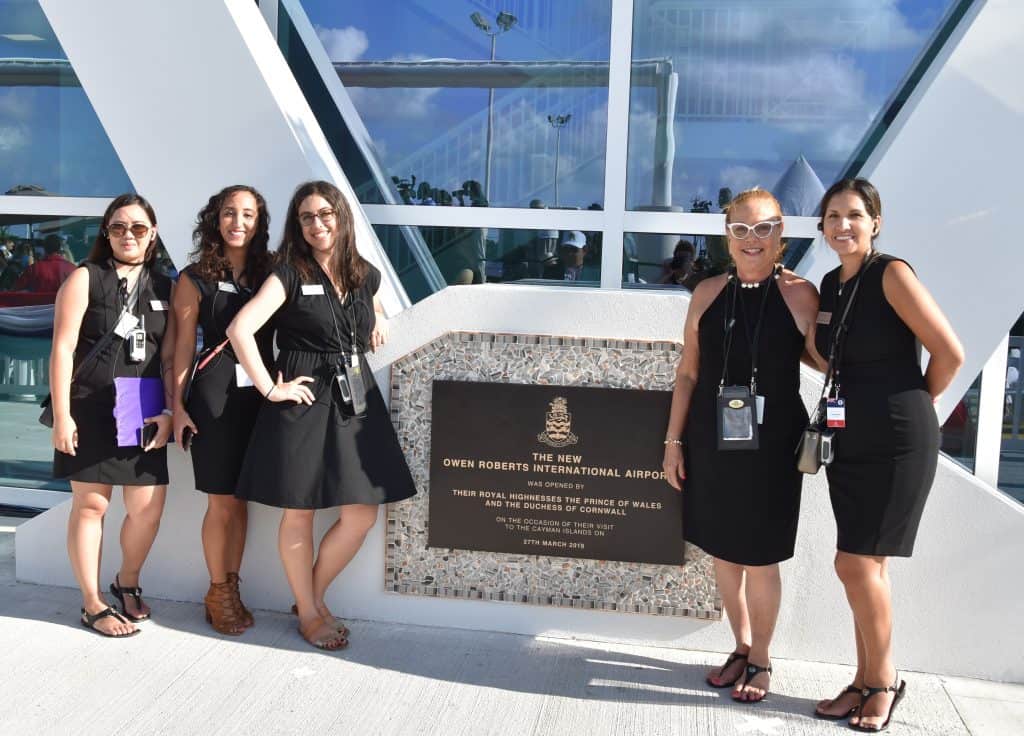 We would like to extend a huge shout out to all of the vendors, partners and utmost of all  our amazing team for the planning, coordination and production of such an auspicious event that went off with seamless execution.

Were you at the opening of the new terminal at ORIA?  What did you think of the Royal visit and the ceremony?