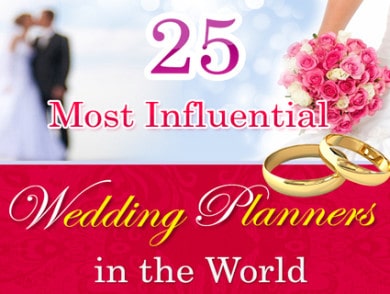 Creative Director JoAnne Brown & Celebrations Ltd named one of TOP 25 MOST INFLUENTIAL WEDDING PLANNERS IN THE WORLD! Check out the article below or visit by clicking here.

Wedding Planners organize and plan one of the most special days in a person’s life. One of the best ways to generate ideas is by watching the top wedding planners. Below are 25 of the most influential wedding planners in the world. Click on their names to learn more about them.

1 Sasha Souza established her events coordination business in 1995. Sasha Souza Events is considered one of the top design and coordination companies in the United States. It has been the recipient of the Gala Award by Special Events Magazine, the ISES Westle Award and the Event Solutions Magazine Designer of the Year Award. Sasha Souza is the author of “Signature Sasha: Magnificent Weddings by Design”. She was a featured planner on the Style Network television program and has been featured on the CBS Early Show, ABC’s Inside Edition, Eye on LA, In Wine Country and Get Married, to name a few. Her work has been displayed in publications such as Modern Bride, Bride and Groom and Weddings in Style. Sasha actively participates in speaking engagements across the United States and Japan to educate others about wedding style and design.

2 Wayne Gurnick has been planning weddings and other events since 1985 and is famous for his elegant beach weddings. He was the winner of the 2013 Wedding Industry Expert Award and has been named one of the “Top 10 Best Wedding Planners in the United States”. Wayne Gurnick is the host of the online radio program, Wedding Words of Wisdom.

3 Preston Bailey has more than 30 years experience in the event planning business. He is the author of six books; the most recent is “Designing with Flowers”. Preston’s clients include celebrities, royal families, CEOs and athletes. His art installations have been showcased around the world and he frequently participates in seminars, editorials and television and radio interviews to provide information on wedding designs.

4 David Tutera opened his own event planning business at age 19. Today, he owns an award winning company honored by Life and Style Magazine as “Best Celebrity Wedding Planner”. He has created events for celebrities including Jennifer Lopez, The Rolling Stones, Susan Lucci, Elton John, Shannen Doherty and Tommy Hilfiger. He is the author of six books. His most recent publication is “Big White Book of Weddings: The How-To Guide for The Savvy, Stylish Bride.” David also has a network television program on WEtv. “My Fair Wedding with David Tutera” is in its sixth season.

5 Sarah Haywood has been planning weddings for 15 years. She is internationally known and frequently appears on television in the UK and abroad. Sarah was the leading expert for CNN and other media consultation during the 2011 Royal Wedding. She was awarded the Business ICON award in London and has been featured in numerous magazines including Bride, Wedding Magazine and Harpers Bazaar Bride. Sarah authored the “Wedding Bible” bridal books and launched the first Wedding Planning mobile phone apps.

6 Marcy Blum established her events coordination business in 1986. She is a graduate of the Culinary Institute of America. Marcy has designed weddings for celebrities such as Kyra Sedgwick and Kevin Bacon, Colin Hanks and Samantha Bryant, Padma Lakshmi and Salman Rushdie and Katie Lee and Billy Joel. She is co-author of two books: Wedding Planning for Dummies and The Wedding Kit for Dummies. She was named Trendsetter by Modern Bride Magazine and was the recipient of the Legacy Award from the International Special Events Society. Marcy has been featured on television programs such as the Today Show, Live with Regis and Kelly, CNBC Reports and the Nate Berkus Show and regularly participates in speaking engagements around the world.

7 Colin Cowie has been in the event planning business for 25 years. He has coordinated events for celebrities such as John Travolta, Nicole Kidman, Jennifer Aniston and Demi Moore. Colin is the author of eight best-selling books including “Extraordinary Weddings” and “Colin Cowie Wedding Chic”. He is a regular on NBC’s the Today Show and HSN.

8 Mindy Weiss began as a party planner 20 years ago and has coordinated events from as little as 2 people to thousands worldwide. She opened her current business, Mindy Weiss Party Consultants, in 1992. Her services have been featured in magazines such as the Knot and Inside Weddings. Mindy is known for her stylish and personalized services and has planned events for many celebrities including Fergie and Josh Duhamel, Jessica Simpson, Serena Williams, Nicole Richie, Pink, Gwen Stefani and Brad Paisley. She also planned the weddings of Trista and Ryan as well as JP and Ashley from the television program, The Bachelor. Both weddings were featured on ABC.

9 Karen Bussen opened her event consulting business in 2000. Prior to that, she worked with a number of New York’s finest chefs to become knowledgeable about the hospitality industry. She has recently developed the Simple Stunning Destination wedding packages. Karen is the author of “Simple Stunning”, a series of entertaining books. She has been featured on numerous television and radio programs including the Bloomberg TV, Today Show, LX-New York, the CBS Early Show, and Martha Stewart’s Morning Living.

10 Alison Hotchkiss Rinderknecht has been in the event planning business for16 years and has coordinated more than 400 events in 9 countries. She is the author of “Destination Wedding” and “All the Essentials Wedding Planner”. Her work has been featured in numerous bridal magazines including Brides, the Knot, Martha Stewart Weddings and Elegant Bride.

11 Lisa Light has been in the event planning business for 17 years and has planned weddings in over 40 countries. In 2006, she authored the book, “Destination Bride: A Complete Guide to Planning Your Wedding Anywhere”. She maintains an extensive blog online. Lisa prides herself on providing fabulous weddings for practically any budget. Her work has been featured in numerous publications including Style Me and Well Wed magazine.

12 Amy Rubins has been in the wedding planning business for more than 14 years and is currently the owner of Fête Perfection. She has planned weddings in numerous locations across the globe. The company has received the Couple’s Choice Award from Wedding Wire five years in a row. It has also been awarded the Knot’s Best of Weddings for 2014. Amy has been featured in a number of publications including Martha Stewart Weddings and Sasha Souza.

13 JoAnn Gregoli founded Elegant Occasions in 1985. She has planned major events such as a fundraiser to build Liberty State Park Science Center as well as dinners for Governor Thomas Kean. The Association of Bridal Consultants awarded her as a professional Bridal Consultant in 1991. After completing their course, she is now a Master Bridal Consultant and was named one of the Trendsetters of the Year in 2007 by Modern Bride Magazine.

14 Zahira Domenech established her wedding consultation business in 2004. Her work has been featured in a number of publications, including Grace Ormonde’s Weddings, Wedding Style, Martha Stewart’s Weddings and Vanidades. Her line of invitations won an award for “Best New Designers” in 2009. Zahira also won the “Bridal Choice Award in 2010.

16 Tracy French is an international celebrity wedding planner and owner of The French Connection Events. Her work has been featured on two wedding television programs: Whose Wedding is it Anyway? and Married Away. Tracy is regularly featured on WOAI Radio talk show as their “Go to Gal” for wedding advice and trends.

17 Evonne Wong founded her events planning business in 2007. She is a Certified Wedding Consultant and began her career coordinating events for Sony Pictures. Later, she held positions as a Wedding Manager and Event Coordinator. She has designed and coordinated more than 300 events in San Francisco and the Hawaiian Islands. Her work has been featured in publications such as Style Me Pretty, the Knot, Wedding Bee, Pacific Weddings and Wedding Wire.

18 Stacy Mulcare has been coordinating weddings in the U.S. Virgin Islands since 1996. Her company received national recognition from the Wedding Industry Experts in 2014. The company has been featured in Bride’s Magazine UK, Destination Weddings and Honeymoons Magazine and the Knot. Their services were also featured on the Travel Channel.

19 JoAnne Brown established Celebration in the Cayman Islands in 1993. They provide wedding event planning from small private beach ceremonies to elaborate weekend productions. JoAnne often participates in speaking engagements at wedding planning events. They have been featured in Destination Weddings and the Knot.

20 Kelly McWilliams established Weddings by Socialites in 2003. The company features weddings in the South Florida area. Kelly provides up to date wedding and South Florida news in her blog. They have been featured in publications such as Bridal Guide Magazine, the Knot, Bride and Groom and Southern Weddings Magazine.

22 Larissa Banting established Weddings Costa Rica in 2003. She has coordinated over 400 weddings and has gained international acclaim. She was featured in Modern Bride magazine in 2007 and invited to the Little Black Book on Style Me Pretty.

23 Anne Marie Williams founded Weddings in the Bahamas in 1987. Their wedding planners offer ceremonies throughout the Bahamas in a variety of settings including beaches, churches or gardens. They are a member of the Bahamas Bridal Association and the Association of Bridal Consultants.

24 Somchit Srimoon started Thailand Weddings in 1994. The company coordinates both Buddhist and Christian weddings. Somchit Srimoon provides information about Thailand weddings in her blog. The planners offer unique experiences for those new to Thailand and can provide enhancements such as Thai dancers, Fire Sword dances and elephant rides.

25 Tiffany Lanier started SunHorse Weddings on the Isla Mujeres in 2002. Her company currently coordinates more than 40 weddings each year on the island. The company has a four star review in Wedding Bee.